I need help with a Statistics question. All explanations and answers will be used to help me learn.

Here are the directions, grading rubric, and definition of high-quality feedback for the Learn by Doing discussion board exercises.

A high school student named David Merrell did an experiment to examine if music affects the ability of rats to run a maze. The explanatory variable was exposure to music. He had three treatment groups: one group listened to heavy metal music by the group Anthrax. A second group listened to Mozart. The third group never heard music. This last group is the control group.

The response variable was the average time (in seconds) to complete three runs. Every week the rats ran the maze three times. Merrell recorded each rat’s average time for the week.

By the end of the month the Anthrax group was much slower at running the maze. The Mozart group was much faster. The dotplots below show average run times for the first and last week of the experiment. Each dot represents one rat. The X-value is the rat’s average run time for the week. (Each rat ran the maze 3 times each week.) The blue line is the mean run time for each treatment group. 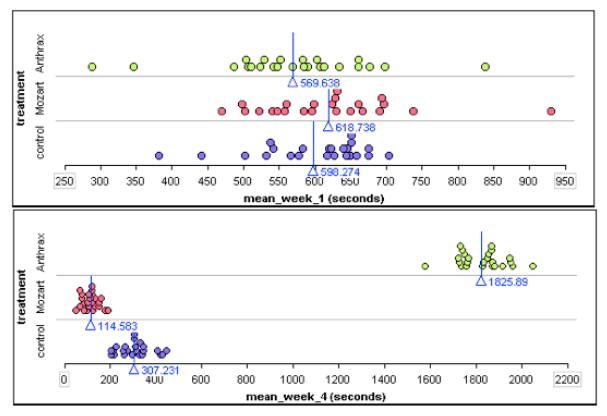 If you are curious, here is a video of Merrell explaining his experiment.

Merrell explaining his experiment (Links to an external site.)

Merrell claims that he randomly assigned rats to treatment groups. Does the data shown in the dotplots above support his claim? Why or why not?