I’m working on a Psychology question and need guidance to help me study.

Throughout this course, you’re learning how to use problem solving and self and social awareness skills to practice the key concepts of psychology. You’re discovering how self and social awareness and problem solving work together to help you understand the perspectives of others, examine situations objectively, and use evidence to develop and make decisions. With this case study assignment, you’ll have the chance to put your skills to work!

Read the case study below and use your problem solving and self and social awareness skills to help a co-worker work through a difficult situation.

Gloria is a recent college graduate and a single mom to 16-year-old Gary. Gloria and Gary used to be close. But recently, Gloria has noticed that Gary is only focused on what his friends think about him. Gary recently snuck out of his bedroom window and went to a party when he was supposed to be studying for a big exam. Gloria caught him coming home and smelled alcohol on his breath and marijuana on his clothes. Gloria is shocked and appalled by her son’s recent behavior and grounded him for two weeks.

Gloria comes to you because she needs some advice on how to handle her son’s poor choices. Using what you have learned about the adolescent brain and social development in Chapter 3 of the webtext, answer the questions below to help Gloria understand why her son is making such poor choices, and pose some recommendations to help her solve her problem:

1. What happens to teen brains that make it difficult for someone like Gary to weigh risk and reward?

2. Why may Gary value his peers more than his mom?

3. What specific strategies or advice would you recommend that Gloria can do to help her son to make better decision

4. Place yourself in Gloria’s shoes; how do you think Gloria is feeling? How can understanding her feelings help you offer constructive advice?

Use the Case Study #1 Assignment Template to record your responses. For each question, you should write a paragraph-length response (5-7 sentences) to receive credit for this assignment. You may use your Soomo webtext as a resource. Once you have completed your work, save the file and upload it to the assignment submission area.

Many psychologists once believed that childhood sets our traits. Today’s developmental psychologists see development as lifelong. As this life-span perspective emerged, psychologists began to look at how maturation and experience shape us not only in infancy and childhood, but also in adolescence and beyond. Adolescence—the years spent morphing from child to adult—starts with the physical beginnings of sexual maturity and ends with the social achievement of independent adult status. In some cultures, where teens are self-supporting, this means that adolescence hardly exists.

G. Stanley Hall (1904), one of the first psychologists to describe adolescence, believed that the tension between biological maturity and social dependence creates a period of “storm and stress.” Indeed, after age 30, many who grow up in independence-fostering Western cultures look back on their teenage years as a time they would not want to relive, a time when their peers’ social approval was imperative, their sense of direction in life was in flux, and their feeling of alienation from their parents was deepest (Arnett, 1999; Macfarlane, 1964).

But for many, adolescence is a time of vitality without the cares of adulthood, a time of rewarding friendships, heightened idealism, and a growing sense of life’s exciting possibilities.

Adolescence begins with puberty, the time when we mature sexually. Puberty follows a surge of hormones, which may intensify moods and which trigger a series of bodily changes.

Just as in the earlier life stages, the sequence of physical changes in puberty (for example, breast buds and visible pubic hair before menarche—the first menstrual period) is far more predictable than their timing. Some girls start their growth spurt at 9, some boys as late as age 16. Though such variations have little effect on height at maturity, they may have psychological consequences: It is not only when we mature that counts, but how people react to our physical development.

For boys, early maturation has mixed effects. Boys who are stronger and more athletic during their early teen years tend to be more popular, self-assured, and independent, though also more at risk for alcohol use, delinquency, and premature sexual activity (Conley & Rudolph, 2009; Copeland et al., 2010; Lynne et al., 2007). For girls, early maturation can be a challenge (Mendle et al., 2007). If a young girl’s body and hormone-fed feelings are out of sync with her emotional maturity and her friends’ physical development and experiences, she may begin associating with older adolescents or may suffer teasing or sexual harassment (Ge & Natsuaki, 2009). She may also be somewhat more vulnerable to an anxiety disorder (Weingarden & Renshaw, 2012).

An adolescent’s brain is also a work in progress. Until puberty, brain cells increase their connections, like trees growing more roots and branches. Then, during adolescence, comes a selective pruning of unused neurons and connections (Blakemore, 2008). What we don’t use, we lose.

Maturation of the frontal lobes nevertheless lags behind that of the emotional limbic system. Puberty’s hormonal surge and limbic system development help explain teens’ occasional impulsiveness, risky behaviors, and emotional storms—slamming doors and turning up the music (Casey et al., 2008, 2013). No wonder younger teens (whose unfinished frontal lobes aren’t yet fully equipped for making long-term plans and curbing impulses) may succumb to the tobacco corporations, which most adult smokers could tell them they will later regret. Teens actually don’t underestimate the risks of smoking—or fast driving or unprotected sex. They just, when reasoning from their gut, weigh the immediate benefits more heavily (Reyna & Farley, 2006; Steinberg, 2007, 2010). Teens find rewards more exciting than adults do. So they seek thrills and rewards, without a fully developed brake pedal controlling their impulses (Figure 2). 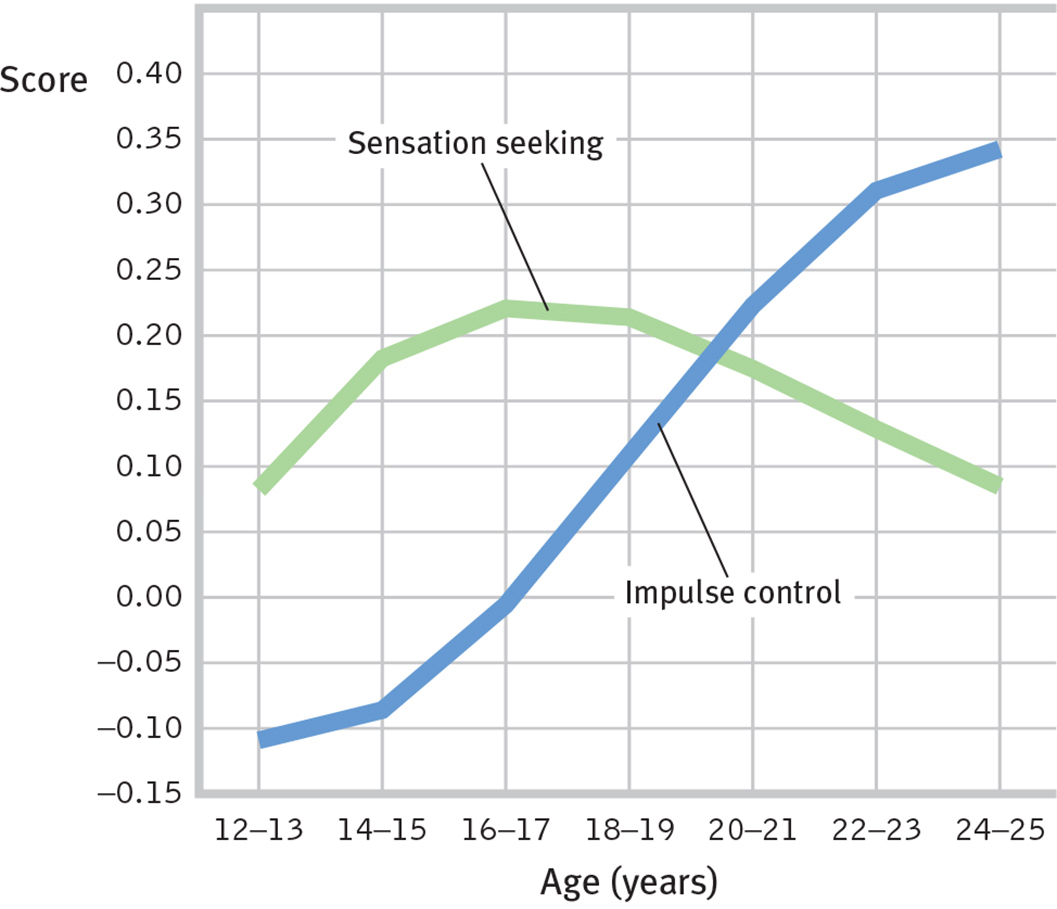 So, when Junior drives recklessly and struggles academically, should his parents reassure themselves that “he can’t help it; his frontal cortex isn’t yet fully grown”? They can take hope: Brain changes underlie teens’ new self-consciousness about what others are thinking and their valuing of risky rewards (Barkley-Levenson & Galván, 2014; Somerville et al., 2013). And the brain with which Junior begins his teens differs from the brain with which he will end his teens. Unless he slows his brain development with heavy drinking—leaving him prone to impulsivity and addiction—his frontal lobes will continue maturing until about age 25 (Crews et al., 2007; Giedd, 2015). They will also become better connected with the limbic system, enabling better emotion regulation (Steinberg, 2012).

In 2004, the American Psychological Association (APA) joined seven other medical and mental health associations in filing U.S. Supreme Court briefs arguing against the death penalty for 16- and 17-year-olds. The briefs documented the teen brain’s immaturity “in areas that bear upon adolescent decision making.” Brain scans of young teens reveal that frontal lobe immaturity is most evident among juvenile offenders and drug users (Shannon et al., 2011; Whelan et al., 2012). Thus, teens are “less guilty by reason of adolescence,” suggested psychologist Laurence Steinberg and law professor Elizabeth Scott (2003; Steinberg et al., 2009). In 2005, by a 5-to-4 margin, the Court concurred, declaring juvenile death penalties unconstitutional. In 2012, the APA offered similar arguments against sentencing juveniles to life without parole (Banville, 2012; Steinberg, 2013). Once again, the Court, by a narrow 5-to-4 vote, concurred.

Theorist Erik Erikson (1963) contended that each stage of life has its own psychosocial task, a crisis that needs resolution. Young children wrestle with issues of trust, then autonomy (independence), then initiative. School-age children strive for competence, feeling able and productive. The adolescent’s task is to synthesize past, present, and future possibilities into a clearer sense of self (Table 3). Adolescents wonder, “Who am I as an individual? What do I want to do with my life? What values should I live by? What do I believe in?” Erikson called this quest the adolescent’s search for identity.

To refine their sense of identity, adolescents in individualist cultures usually try out different “selves” in different situations. They may act out one self at home, another with friends, and still another at school or online. If two situations overlap—as when a teenager brings new friends home—the discomfort can be considerable (Klimstra et al., 2015). The teen asks, “Which self should I be? Which is the real me?” The resolution is a self-definition that unifies the various selves into a consistent and comfortable sense of who one is—an
identity.

For both adolescents and adults, group identities are often formed by how we differ from those around us. When living in Britain, I [DM] become conscious of my Americanness. When spending time with collaborators in Hong Kong, I [ND] become conscious of my minority White race. When surrounded by women, we are both mindful of our male gender identity. For international students, for those of a minority ethnic group, for gay and transgender people, or for people with a disability, a social identity often forms around their distinctiveness.

Erikson noticed that some adolescents forge their identity early, simply by adopting their parents’ values and expectations. (Traditional, less individualist cultures teach adolescents who they are, rather than encouraging them to decide on their own.) Other adolescents may adopt the identity of a particular peer group—jocks, preps, geeks, band kids, debaters.

Most young people do develop a sense of contentment with their lives. A question: Which statement best describes you? “I would choose my life the way it is right now” or, “I wish I were somebody else”? When American teens answered, 81 percent picked the first, and 19 percent the second (Lyons, 2004). Reflecting on their existence, 75 percent of American collegians say they “discuss religion/spirituality” with friends, “pray,” and agree that “we are all spiritual beings” and “search for meaning/purpose in life” (Astin et al., 2004; Bryant & Astin, 2008). This would not surprise Stanford psychologist William Damon and his colleagues (2003), who have contended that a key task of adolescence is to achieve a purpose—a desire to accomplish something personally meaningful that makes a difference to the world beyond oneself.

These are the years when many people in industrialized countries begin exploring new opportunities by attending college or working full time. Many college seniors have achieved a clearer identity and a more positive self-concept than they had as first-year students (Waterman, 1988). Collegians who have achieved a clear sense of identity are less prone to alcohol misuse (Bishop et al., 2005).

Erikson contended that adolescent identity formation (which continues into adulthood) is followed in young adulthood by a developing capacity for intimacy, the ability to form emotionally close relationships. When Mihaly Csikszentmihalyi [chick-SENT-me-hi] and Jeremy Hunter (2003) used a beeper to sample the daily experiences of American teens, they found them unhappiest when alone and happiest when with friends. Romantic relationships, which tend to be emotionally intense, are reported by some two in three North American 17-year-olds, but fewer among those in collectivist countries such as China (Collins et al., 2009; Li et al., 2010). Those who enjoy high-quality (intimate, supportive) relationships with family and friends tend also to enjoy similarly high-quality romantic relationships in adolescence, which set the stage for healthy adult relationships. Such relationships are, for most of us, a source of great pleasure.